Check out my new page here facebook.com/busbier!
Posted by Bus at 11:51 AM No comments:

Ok, so it isn't really a new brewery but it is the first time I have brewed since we moved into our new place. Right off the bat I messed up my recipe. I was going to brew hopped up maggie today which is an american IPA style beer. I was in such a hurry to get started that I put all my grains together and put them through the grain mill. I only then realized I didn't need to use all of the grain. Well to late so I will now call this beer WTF!! maggie. I went ahead with the recipe as planned after that. Everything else went well, so it wasnt a total loss. I have a couple of beers coming up that I'm looking forward to. Black squirrel which is going to be a chocolate russian imperial stout and Beet your Wheat. Use your imagination.
Posted by Bus at 9:38 PM No comments:

So tonight I kegged my Imperial IPA. While I was kegging I stole a small sample to check out the aroma, color and flavor before carbonation. It has a copper color with a strong but not overwhelming hop aroma from the dry hops. I can even smell some of the sweetness of the left over sugars from the malts. I am happy with the flavor of the beer before carbonation. I know that the carbonation will only bring out more of the flavor and aroma. I did try the beer and over all I'm happy with it. Next time I will try to dry hop for less time to avoid a bit of what I think is a grassy flavor. I'm looking forward to the weekend when I can try this beer as a finished product.
Posted by Bus at 11:11 PM No comments:

Ok so i haven't been keeping the blog up. Sorry! A few things have happened since my last post. I helped some friends at the double shot bike race where I had a chance to hand out some beer and meet some really cool people. I have brewed an Imperial IPA and it is in the final stages of fermentation. I will put this beer in the keg next weekend. Then i can put a post up with my thoughts about this beer. I also have a couple projects I'm going to be working on soon. Stay tuned!!
Posted by Bus at 8:56 PM No comments: 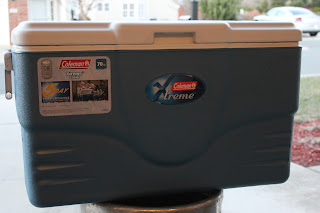 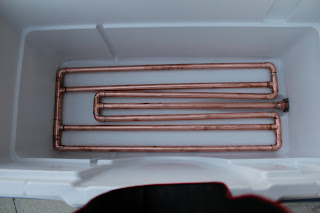 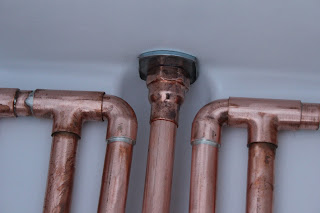 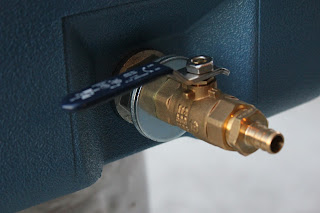 I found this 70 qt coleman cooler online for a great price. I know it is a little big for 5 gallon batches but it will be great for 10 gallon batches when I'm ready. I made a manifold out of 1/2 id copper pipe. I drilled 3/32 holes in the bottom. I didn't solder all the joints so i could take it apart and clean it. I then removed the spigot and installed a ball valve in it's place.
Posted by Bus at 7:57 PM No comments:

This is the second beer I've made for the  http://ad-doubleshot.blogspot.com/. I got this recipe from northern brewer because it recieved great reviews. I haven't tried this beer yet but I am sure it will be good based on the ingredients. It is described as a beer with brisk hop flavor and a coppery golden color. This beer is now in fermentation and I'm looking forward to kegging it and giving it a try.
Posted by Bus at 9:01 AM 1 comment: 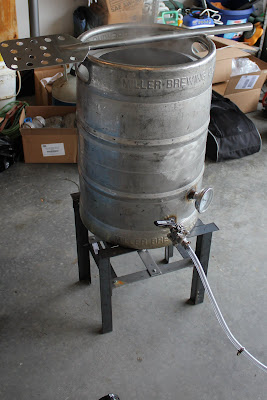 This is my brew pot. I made this out of an old beer keg that that i found locally. I cut a twelve inch hole in the top. Then drilled two 3/4 inch holes in the side. I had a friend weld the fittings in place for me. One hole was for the thermostat and the other was for the ball valve. I also made the stand for the burner. I used some angle iron and an old burner from a turkey fryer.
Posted by Bus at 7:50 PM No comments: